View cart “SINFONIA OF PASSION – String Orchestra with Two Soloists, including many DUET possibilities” has been added to your cart.

Fantasy-Sonatina – Duo for Flute and Piano

available here for €3.50
You have 4 opportunities to download, within a period of 7 days

The Fantasy-Sonatina was written in the summer of 2001 during some short holidays in Santoña (North Spain). The original title was going to be simply ‘Fantasy’, but as the composition grew with a more organized structure it seemed more appropriate to add the word ‘Sonatina’. It is cast in a kind of Sonata form in miniature with only one principal theme in the exposition, followed by a small development section, recapitulation and coda. The work starts with a brief introduction, which is itself linked thematically to the main movement.

However, apart from the ‘formal’ considerations, there are various cadences (cadenzas) for the flute, which certainly do give a sense of ‘fantasia’. Also worthy of mention is that, in the same way that Bach occasionally used the notes in German B-A-C-H as a musical motive (as also did Schumann, Franck and Shostakovich in their own way), Johnstone almost constantly plays with a motive relating to the name R-CASADO; that is, Re-C-A-eS-A-D-0 {0=nothing!}. It was in this way that the piece came to fruition, arising from a special request of the excellent Spanish flautist Roberto Casado, and nobody can therefore doubt where the dedication of the work goes to! He was particularly interested in a lyrical work that was basically ‘tonal’ whilst at the same time showing some harmonic involvement with the twentieth century, suitable both for himself and some of his better students.

The result is a really multi-use piece. It can well serve in formal recitals and in less serious ones. As a main repertoire piece in twentieth-century melodic style, it would not sound out of place alongside other ‘lyrical’ composers, for example, Ravel, Poulenc or Prokofiev etc. However, it is also a little more simple to perform that the listening public might guess, thus being very adequate to music college (and indeed to pre-music college level students). This especially applies to the piano part which is not at all dense – deliberately without unnecessarily ‘cluttering’ the resources, although as a result a very clean precision is called for. In fact, it is not that often encountered in woodwind recital works where a Duo could be comfortably played by two youngsters of the same age-group, and not having to rely on one’s teacher or a professional accompanist to fulfil the role. The writing for the flute is generally very melodic, cantabile, and thoroughly agreeable, though not without its own moments of more virtuosic fantasy; this being an original request from the dedicatee, in order that it should be as interesting and likeable to many flautists of quite different achievement levels as it is to the general public. 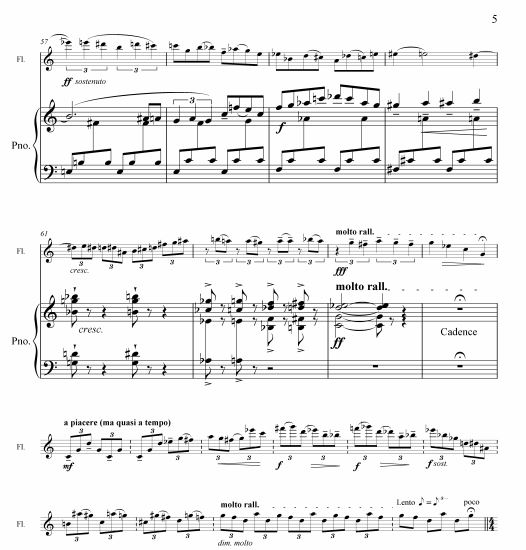 A note from David:

“If you wish to have a very professional quality copy of this music, set with high quality paper in a deluxe edition please contact the publisher CREIGHTON’S COLLECTION for a prompt delivery at an economical price – recommended for performance. It has a sharpness of image superior than you will find in the Johnstone-Music web shop”.

Welcome to Johnstone-Music! A big Anglo-Spanish web for MUSICIANS and especially CELLISTS – original music scores for orchestral instruments and keyboard. Plus articles, audios, videos, resources, catalogues, news etc. Official web of the professional cellist David Johnstone, principal cello Navarre Symphony Orchestra (Spain), chamber musician and soloist in many premieres. Hundreds of cello arrangements in the web for a symbolic charge of €1.00 per download or for free.

Directly from the home page: