This year represents a milestone in the history of French music: Saint-Saëns lived from 1935 to 1921.

He wrote in virtually all genres, including opera, symphonies, concertos, songs, sacred and secular choral music, solo piano, and chamber music. He was generally not a pioneer, but his music is often surprising, and certainly elegant.

Saint-Saëns was born in Paris on October 9th, 1835. He was one of the most precocious young musicians ever, beginning piano lessons with his aunt at two-and-a-half and composing his first work at three. When he was ten, he gave a concert that included Beethoven’s Third Piano Concerto, Mozart’s B flat Concerto, K. 460, along with works by Bach, Handel, and Hummel. It is a legend that at aged 11 and as an encore to a recital he asked the public WHICH Beethoven piano sonata they would like to hear him play from memory!

In his academic studies, he displayed the same genius, learning languages and advanced mathematics with ease and celerity. He would also develop keen, lifelong interests in geology and astronomy. Ahh, and he was a staunch defender of the rights and respect of animals!

In 1875, Saint-Saëns married the 19-year-old Marie Truffot, bringing on perhaps the saddest chapter in his life. The union produced two children who died within six weeks of each other, one from a four-story fall. The marriage ended in 1881. Curiously, after 1890, Saint-Saëns’ music was regarded with some condescension in his homeland, while in England and the United States he was hailed as France’s greatest living composer well into the twentieth century. Saint-Saëns experienced an especially triumphant concert tour when he visited the U.S. in 1915. In the last two decades of his life, he remained attached to his dogs and was largely a loner. He died in Algeria on December 16th, 1921.

So here is what I offer you from the perspective of the cello:

A small work in the form of a “Concertino”, perhaps good to be programmed alongside a full Saint-Saëns concerto. This writing is easier than the cello concerti, but shows the voice and energy of the cello soloist. It was originally for horn soloist, but lies excellently for cellists.

SAINT-SAËNS – Danse Maccabre, for Cello and Piano (or orchestra)

A famous piece of Saint-Saëns, often played in the orchestral version. Johnstone uses the vocal soloist for his solo cello part; however it can be performed either with piano or orchestral accompaniment [Johnstone-Music does not supply the orchestral score nor the instrumental parts]. Some liberty has been taken in the cello registers so as to maintain the interest to the very end.

A wonderful romantic song, set in the key of B Major, though with a central section in D Major. The voice part directly transported for cello is in the middle-high register of the cello (all writing is in the treble clef) where maximum expression can be attained.

A lovely late work of Saint-Saëns, originally written for trombone soloist but suiting the cello perfectly as a direct transcription. An interesting inclusion for recitals!

An original piece of Saint-Saëns, written during World War I in 1915. Scored for trombone soloist initially it makes a perfect concert piece for cellists – very playable even for intermediate cellists, the only real difficulty is perhaps the tonality – it is set in Db Major! Duration nearly 6 minutes

A gentle, yet moving, song that sounds good for all cellists, whether playing for only a couple of years or up to professional! The two cello parts are of equal importance; often the melodic lines are in thirds or sixths. Only the first four left-hand positions are used, however the key of F Major means that there are frequent backward extensions employed. All in all, a romantic piece that is easy to put together yet sounds convincing!

I should mention that there is always a total minimum of €4.00 in the web shop – because less than that the financial commission eats up too much!! However you can always add up to three free priced pieces in any order.

Photo of the featured composer… 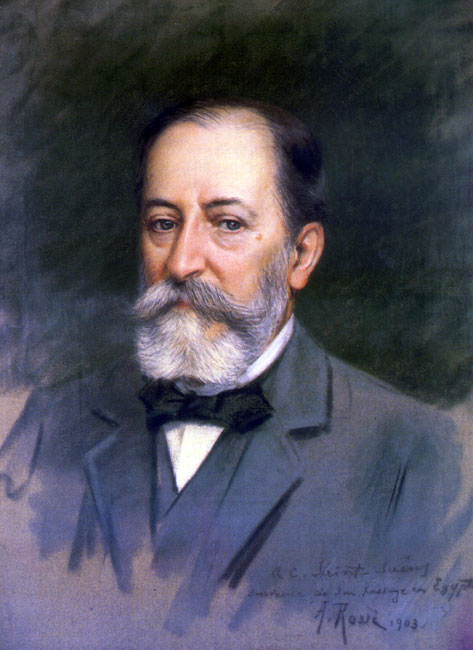