Bruch was inspired to write Kol Nidrei after hearing the Jewish prayers “Kol Nidrei” and “Oh Weep For Those That Wept on Babel’s Stream”, and even consulted a cantor while writing it. The first half of Bruch’s Kol Nidrei is based on the melody of the Jewish prayer Kol Nidrei and the second half is based on the melody of Oh Weep For Those That Wept on Babel’s Stream. In Judaism, the prayer Kol Nidrei is one of the most holy and also most painful prayers. In the prayer, one asks god for forgiveness and atonement for any broken vows they have made with god in the past year. Oh Weep For Those That Wept on Babel’s Stream tells the story of when the Jews were prisoners and slaves in Babylon. It is a very somber prayer which tells of how the Jewish people were taken from their land and are crying while reminiscing of how life used to be and that it will never be the same. Bruch intended the solo part to emulate the voice of the cantor singing the prayers. In light of this one should always think of the pain and sadness with which the cantor sings these prayers (often with tears in his eyes) when you play this piece.

Bruch completed the work in Liverpool, England, in 1880 and it was published in Berlin in 1881. It was dedicated to Robert Hausmann – he had requested such a cello work from Bruch, and was to give the premiere.  Hausmann later co-premiered

Johannes Brahms’s Double Concerto with Joseph Joachim (the dedicatee of Bruch’s most famous work, the Violin Concerto No. 1 in G minor).

Johnstone’s reworking of the whole piece is a kind of half-way meet between the composer’s orchestrated definitive and the piano reduction. The soloist part has not been altered in any way. The accompaniment has been made in four voices, which can correspond to four chamber music cellists – making a quintet in all – or by a (sometimes much) larger cello ensemble. In general everything of Bruch has been included, though the harp passages in the second part have been rather simplified to make them better playable on the first group cellist (in the case of cello ‘orchestral’ playing maybe these passages might be played by one cellist only from group cellists ‘1’? Your choice!). Other frequent double-stoppings might also benefit by being considered as ‘divisi’ notes when larger forces are utilized. No general score is offered; a conductor can use the piano reduction as a score…

This musical creation was originally written for: this arrangement has been made at the suggestion of the Spanish cellist Miguel Calvo, to whom it is dedicated.

Here are some recordings which were passed to me of my version: 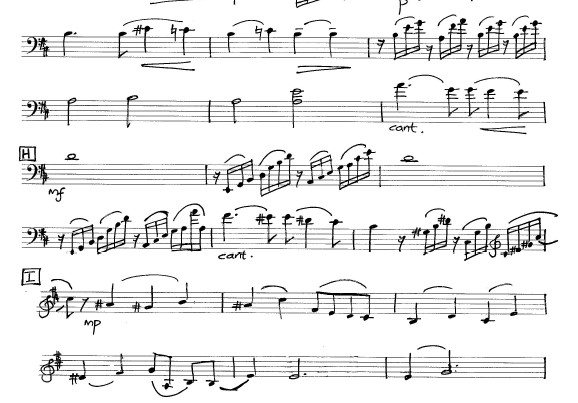