The tempo indication is – Andante religioso

Firstly an important note of clarification; composer Jean-Baptiste Fauré should not be confused with the famous Gabriel Fauré! Jean-Baptiste Faure (15th January 1830 – 9th November 1914) was a celebrated French operatic baritone, composer and an art collector of significance. He composed a number of romantic songs. As a performer Faure possessed a dark, smooth yet flexible baritone voice, which he used with impeccable skill and taste. He was a sophisticated interpretive artist, and was one of the most significant figures to have appeared on the French musical stage during the second half of the 19th century. He wrote two books on singing, La Voix et le Chant (1886) and Aux Jeunes Chanteurs (1898), and taught at the Paris Conservatory from 1857 to 1860. Some of Faure’s own songs were considerably enduring although now less well-known in the 21st century. These included a “Sancta Maria”, “Les Rameaux” (“The Palms”) and “Crucifix”; these latter two songs were recorded by Enrico Caruso, among others. In 1876 he dedicated his valse-légende “Stella” to his sometime leading lady at the Paris Opéra, Gabrielle Krauss.

The ‘Crucifixus’ is of very good quality, and its harmonies not stand up ain a dignified fashion to the greatest composers of the period. It is dated c.1873, and woven upon texts of Victor Hugo (1802-1885). Subsequent versions were made for organ, and also with the principal melody on violin, so it is to be hoped that this FIVE cello version will prove equally rich!

As an anecdote, this one was of the first ‘mature’ arrangements that David Johnstone ever made for cellos, whilst he was studying at the RAM in London. It remained hidden away for some thirty years until his friend, the fabulous London cellist Paul Marleyn, re-sent it to him by surprise! So a little twigging here and there, and the key lowered a tone, and here is the ‘brand new’ version – the least I can do is to dedicate to Paul Marleyn!!!

This musical creation was originally written for: The Rehearsal Orchestra (Great Britain) and Paul Marleyn 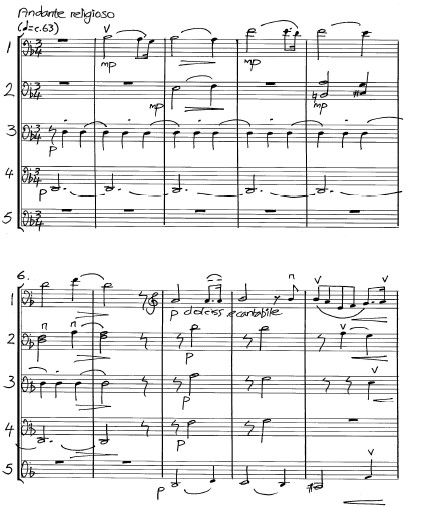